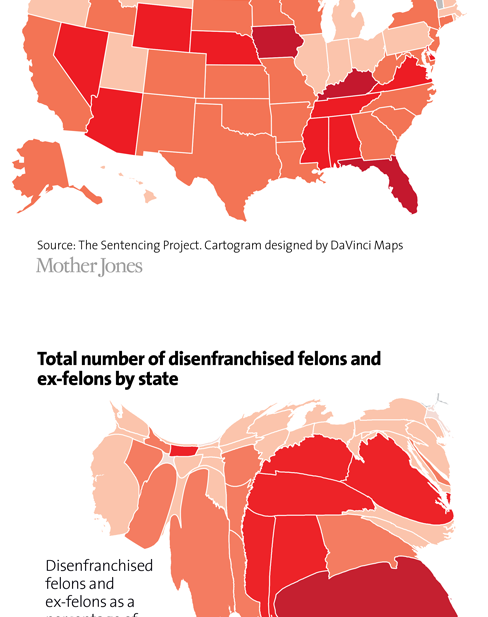 It’s time to bring American democracy to the Florida In Florida, more than 1.6 million citizens cannot vote due to a previous felony conviction – even after they have completed their sentence and paid their debt to society.

This is because, in Florida, citizens with a felony conviction are permanently banned from voting unless they individually apply to the state Office of Executive Clemency for rights restoration. And this process of applying for rights restoration can take years with no guarantee of being approved.

Florida’s voting rights policies manage to keep more than one in five African-Americans in the state from the polls. It is the reason that Florida has the highest disenfranchisement rate in the country.

What happens in other states?

In the vast majority of states, most former felony offenders automatically gain the right to vote upon the completion of their sentence.

Maine and Vermont never revoke the right to vote

The remainder of the states’ policies fall somewhere in between

Only Kentucky and Iowa have similar policies, which permanently bar former offenders from voting unless they get a pardon from the governor. In Iowa, 93% of appeals are approved and in Kentucky 83% are approved.

But in Florida, only 8% are approved.

And individuals must wait 5-7 years after probation and parole to just to file an appeal to have their rights restored. After filing, it can take years before the case is even heard.

How are voting rights restored in Florida?

When a case is finally brought to the Executive Clemency Board, the members of that board vote to restore voting rights on a case by case basis.

However, the board is comprised of partisan elected officials including the Florida’s Governor, Attorney General, Chief Financial Officer, and Commissioner of Agriculture. Even worse, The Executive Clemency Board can change their policy on rights restoration at any time, meaning that new policies are often enacted to serve political agendas.

Under the current “Scott rules”, enacted by Governor Rick Scott, an individual seeking clemency can be denied for any reason or no reason at all. And applicants must wait two years each time they are denied to apply again.

Floridians for a Fair Democracy is sponsoring a petition campaign to amend Florida’s Constitution, making it easier for non-violent felons to have their voting rights restored.

The amendment would automatically restore the voting rights of non-violent felons who have completed the terms of their sentence, including probation and parole. The amendment would not apply to those convicted of murder or sexual offenses.

On Thursday, April 20, 2017 the Florida Supreme Court approved the text of the ballot initiative. Now we need Floridians across the state to stand up for voter’s rights and sign the petition. We need about 700,000 signatures from Florida registered voters in order for the Voting Restoration Amendment to appear on the 2018 ballot.

Nearly every other state in the country restores voting rights to non-violent felons who have served their sentence. Florida’s law, which is 150 years-old, is rooted in a racist past that continues to work disproportionately against African-American voting-age citizens.

The reason? Mainly, it’s because blacks are more likely than whites to be arrested and convicted for the same felony offenses. Studies have confirmed this and it’s also evident in Florida’s prison population – 48% are African-American while only 17% of Florida’s total population is African-American.

In addition to being racist, many felony charges are questionable in the first place. In the United States, police arrest more people for marijuana possession than all violent crimes combined. Marijuana arrests now account for over half of all drug arrests in the United States and blacks are 3.73 times more likely than whites to be arrested for marijuana.

Studies show that people returning from prison who have their right to vote restored are three times less likely to commit crimes in the future. Bringing people back into the political process as stakeholders in the community creates a safer, more engaged society.

Amending the state Constitution is the ONLY WAY to make sure that voting rights are permanently protected.

Previous Post: « Vote with Your Wallet – Lifestyle Design for the Greater Good
Next Post: How to Upload MIDI into Hookpad »

I love to learn new things creatively, looking for connections and new ways of understanding or applying concepts. I've been practicing yoga since my teens and recently started ballroom dancing. My other interests are (mostly vegan) cooking, music, and "casual" philosophy. This website explores these interests and occasionally weaves them together. I hope you enjoy! Get in touch…